GATE OF HEAVENLY PEACE, THE 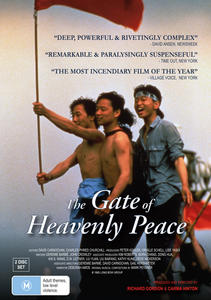 In April 1989, students occupied Tiananmen Square, using the occasion of the death of Communist Party reformer Hu Yaobang to protest against government corruption and to call for political reform. Ordinary Chinese followed their lead and at the height of this protest movement, more than a million people marched in the streets of Beijing to support the students. Mass demonstrations occurred in cities across China.

In May 1989, the international media converged on China to cover the visit of Soviet President Mikhail Gorbachev. They came for a summit but walked into what looked like a revolution, clamorous, colourful, and highly photogenic.

The reality was far more complex. Student leaders disagreed about goals, strategies and tactics, and the government was divided as well. Some leaders saw all protest as counter-revolutionary, but others were anxious to avert repression and push China in the direction of gradual political reform. This film reveals how moderate voices were gradually cowed and then silenced by extremism and emotionalism on both sides.

In the course of its story of the events of April to June 1989, THE GATE OF HEAVENLY PEACE presents a wide range of Chinese views concerning the struggle for a better society, including the ongoing debate in China concerning the importance of personal responsibility and moral integrity in public life. It follows the fate of the moderate "third way" of Chinese political debate and civic action, which has remained largely unnoticed by the Western media.

THE GATE OF HEAVENLY PEACE was directed by Carma Hinton, who was born and raised in China, and Richard Gordon, who has been involved with many films about China as a director, producer and cinematographer. Geremie Barme, well-known Australian commentator and author on China, was assistant director and co-writer. With an international group of scholars, as well as participants in the events of 1989, they have spent years investigating this important and intriguing story and compiling the huge archive of visual materials on which the film draws.

"The most incendiary film of the year." - Village Voice, New York.