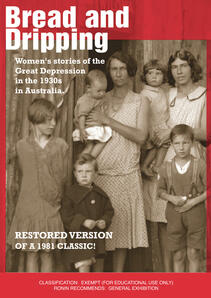 In Bread and Dripping, four women recount their lives during the bleak years of the economic depression of the 1930s. Tibby Whalan, Eileen Pittman, Beryl Armstrong and Mary Wright describe their struggles to survive and maintain families when faced with widespread unemployment, evictions and hardship.

The film makes extensive use of archival footage and photographs from the 1930s to present a unique insight into the lives of women in Australia.

The title, Bread and Dripping, refers to a meal of leftover fat soaked in bread and eaten when no other food was available.

"Aboriginal women weren't allowed to get the child endowment nor the baby bonus ... you see they had nothing."

A film by
Vic Smith,
Margot Nash,
Elizabeth Schaffer
Wendy Brady
and Donna Foster
Produced with the assistance of the Australian Film Commission and the Women's Film Fund.

Education notes are available at aso.gov.au/titles/documentaries/bread-and-dripping/

FILM, FEMINISM AND TELLING WOMEN'S STORIES
(Extract from the Bread and Dripping Information Kit (see link below to download the full Kit, free of charge)

Bread and Dripping was developed in the context of feminism and the increased activity of women in filmmaking in the 1970s and 80s. The Sydney Women's Film Group, which operated out of the Sydney Filmmakers Co-op, was a focal point for discussion around feminism and film. Actively working to support the creation, distribution and exhibition of films made by women that gave voice to women's stories, the group organised workshops that provided women with access to filmmaking skills. While attending a Women's Film Workshop, four young women with little previous experience in filmmaking came together around an idea for a documentary exploring the experience of the Great Depression in Australia from the point of view of women who had lived through it. These women, Vic Smith, Elizabeth Schaffer, Wendy Brady and Donna Foster, formed a production company called Wimminsfilms and applied successfully to the Creative Development Branch of the Australian Film Commission and the Women's Film Fund to develop the documentary that became Bread and Dripping.

Taking the experience of women during the Great Depression as its focus, rather than the experience of men so often represented, research for Bread and Dripping aimed to learn directly from women themselves through their stories of survival and growth in extraordinary times. Through networks of family and friends; interviews conducted with writers and academics such as Kylie Tennant, Nadia Wheatley and Wendy Lowenstein; and in meetings with women who had been active in trade unions and women's organisations from the 1930s, the filmmakers built up a rich picture of women's lives at a time of major economic and social crisis. Eventually the stories shared by four women emerged as representative of the struggles of so many women during the period.

At every stage in the development of Bread and Dripping, filmmaking tasks were shared including the research, fundraising, production and post-production. During filming the roles of director, camera operator, sound recordist and interviewer were rotated across the collective. Many months were spent searching for images and archival footage of women's lives in the 1930s. Margot Nash, who was initially engaged as a professional advisor during filming, went on to take a major role in editing the documentary, becoming part of the Wimminsfilms collective during this period.

Bread and Dripping went on to be shown around the world at national and international film festivals, on television, in schools, trade unions and in community settings around Australia. It continues to be a rare and powerful insight into women's lives. Positioning Bread and Dripping within the context of feminism and the vibrant activity of women in filmmaking in Sydney in the 1970s and 80s gives another layer of meaning to this classic of Australian documentary filmmaking.