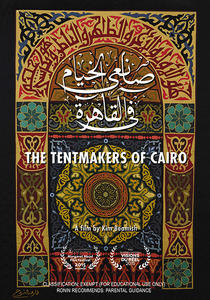 "Beautifully constructed and persuasive viewing ... a subtle and thoroughly engaging doco. ... It allows the men to tell their own story virtually unmediated, and it's fascinating. ... Something tells me that the cultural anthropologist Margaret Mead would have enjoyed hearing that a documentary award in her name had gone to a film about men who sew." - Jane Freebury, Canberra Times

Over a period of three years, THE TENTMAKERS OF CAIRO follows a community of Egyptian artisans whose craft has remained largely untouched since Pharaonic times. While their hands stitch superbly detailed traditional designs, they try to make sense of Egypt's turbulent political scene, from the 2011 revolution to the election of Abdel Fatah Al Sisi in 2014.

Progressively, the tentmakers' world is infiltrated by propaganda, rumour and paranoia. Celebrations turn to conflict, and their colourful back alley becomes a mirror of a larger public space, reflecting the complexity and drama of a country in turmoil.

This outstanding observational documentary is a fascinating insight into a grass roots view of world-changing events. Without narration or interviews, and with a soundtrack derived from the sounds of the street, the film brings a much-needed human dimension to the brief news grabs on the world's TV screens.

A film by Kim Beamish.

Follow this link to view THE TENTMAKERS OF CAIRO trailer: vimeo.com/656818248