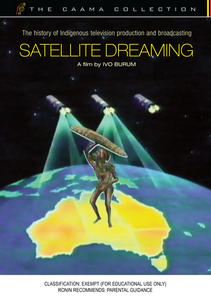 A film of considerable historic importance, this documentary narrates the emergence of Indigenous broadcast media in Australia, and discusses its role in maintaining Indigenous languages and culture.

In the early 1980s, the Federal Government announced that there would be a national satellite (AUSSAT), and encouraged the use of this satellite by Aboriginal peoples in remote areas of central Australia.

The ground-swell of concern among Aboriginal communities about the harmful effect on young people of mainstream, English-language content, led to the creation of CAAMA Radio at Alice Springs in 1980. Growing demand for Aboriginal video and television content also prompted the national broadcasters to make forays into Aboriginal programming with such early series as Blackout (ABC) and First in Line (SBS) in 1988-89.

The film also looks at the work of other Aboriginal media associations – at Yuendumu (the Warlpiri Media Association) and at Ernabella (EVTV). In each case, broadcasting arose in response to local demand to preserve Aboriginal language and record traditional culture. Their work was instrumental in providing the impetus for CAAMA to go into video production and then to bid for a broadcast licence. CAAMA's involvement with the winning of a TV licence – Imparja TV – created new opportunities for regular Indigenous news broadcasts and in-depth programmes.

Including interviews with key participants in the emergence of Aboriginal media, the film is an invaluable historical record of what is now a strong and important part of our national culture, albeit still with financial pressures and competition with mainstream broadcasters.