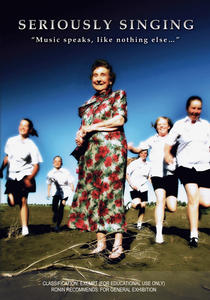 At a small school in the Victorian Mallee, indefatigable 91 year-old choral conductor, the late Jessie Carmichael, works with a group of novice singers to revisit a legendary moment in local history.

Almost sixty years ago, Jessie took a group of children at Lake Boga Primary School who "couldn't tell a crotchet from an aniseed ball" to win national acclaim at the Commonwealth Jubilee Choral Festival. Local sceptics were amazed when the choir were flown specially to Melbourne to perform with the Melbourne Symphony Orchestra in an event broadcast nationally by the ABC. As the only country choir selected to take part in the Jubilee event, Lake Boga Primary School became the pride of the district and an inspiration to children and rural communities across Australia.

Looking back on this momentous event, once young choristers now in their sixties and seventies recall a revelatory experience. In the words of one chorister: "It gave us the confidence to know that we could be as good as anyone, that nothing was beyond us..."

Jessie Carmichael remains passionate about the value of music in education and the potential of singing to stimulate and inspire young minds. Approaching her new charges at Lake Boga, she demands extreme effort and absolute attention to detail, ensuring that every word of a song is properly understood and given due meaning.

Seriously Singing is a film about the surprising resonance of history and the capacity of young singers to exceed all expectations, including their own.

Follow this link to view the SERIOUSLY SINGING trailer: www.youtube.com/watch?v=IIaMAIzP1tw