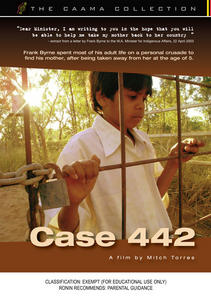 "Dear Minister, I am writing to you in the hope that you will be able to help me take my mother back to her country ..." - extract from a letter by Frank Byrne to the W.A. Minister for Indigenous Affairs, 22 April 2003.

Frank Byrne spent most of his adult life on a personal crusade to find his mother, after being taken away from her at the age of 5.

In 1942, Frank Byrne was separated from his mother when he was 5 years old. He went to a series of mission schools and, when he was an adult, became a stockman. Following the separation from her son, his mother went into a deep depression and suffered a breakdown, and was committed to a mental asylum.

For most of his life after the age of 5, Frank was determined to find his mother. In 2000, his enquiries led him to official records which disclosed that his mother had spent 18 years in a mental hospital until her death at the age of 43. He was then able to locate her unmarked grave in Perth's Karrakatta Cemetery, and to meet people who knew her and cared for her.

CASE 442 follows Frank's experiences in moving his mother back to her birth country on the banks of the Fitzroy River and re-burying her there after a proper ceremony.

This deeply moving film presents Frank's story and the story of his mother with direct simplicity, as a vivid example of the lifetime of grief and loss experienced by members of the "stolen generation".