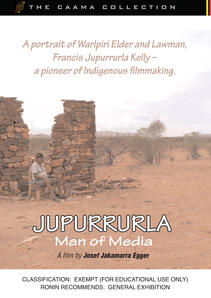 A portrait of Warlpiri Elder and Lawman, Francis Jupurrurla Kelly – a pioneer of Indigenous filmmaking in central Australia.

Jupurrurla was the producer of highly regarded TV programs such as Bush Mechanics, Manyu Wana and Coniston, and was a key figure in the foundation of the Warlpiri Media Association. The Association is operating to this day as PAW Media (Pintubi, Anmatjere and Warlpiri Media), from its base in Yuendumu, about 300km north-west of Alice Springs in central Australia.

In 2016 Jupurrurla was elected Chair of the Central Land Council (CLC) to represent the Indigenous people of Central Australia in the Northern Territory. His commitment and contribution as an ambassador for Aboriginal people resonates throughout Australia, having a profound impact on many Indigenous lives.

This film follows Francis as he performs his various roles in official capacities and as a respected leader, film-maker and role model within his community of Yuendumu.

With privileged access to archival material from the 1980s to the present day, the film tells a rich and colourful story of a man, his work, his family and the life of his community.

To this day Francis continues to document history through film so that story and culture can be preserved, and for audiences all over the world to understand more about his people, their struggles and their dreams.

In recognition of his work on Jupurrula, Josef Kelly received the Steven McGregor Award for Best Emerging Talent at the Remote Indigenous Media Awards, 2019.