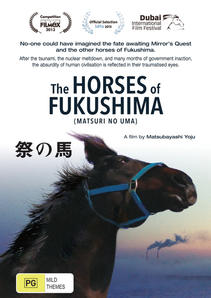 A powerful and heart-breaking film of continuing relevance as new disclosures continue to emerge from the Fukushima disaster.

After the tsunami, the nuclear meltdown, and many months of government inaction, the absurdity of human civilisation is reflected in their traumatised eyes of horses trapped for many weeks in a stud-farm within the exclusion zone around the Fukushima power-plant before the survivors could eventually be rescued.

No one could have ever imagined the absurd fate awaiting Mirror's Quest and the other horses of Fukushima: almost dying in the tsunami; exposed to radiation inside the 20km exclusion zone surrounding the nuclear meltdown; left for weeks without fodder; shut away in stables for months because of government red tape.

A third-generation rancher, Mr. Tanaka, had 40 horses within the 20km radius of the nuclear plant. In March 2011, he was forced to evacuate immediately after the nuclear accident, and had to abandon the horses. Only some weeks later was he permitted to re-enter the restricted zone, to find many horses starved to death and others suffering from trauma and disease.

The horses had been bred and trained to participate in the spectacular annual horse festival of the Fukushima area, Soma Nomaoi, which celebrates the contribution of horses to human society, as partners in warfare and farming. It is a festival with a proud and celebrated 1,000-year history, but now the horses have become a headache for the authorities.

A horse meat industry flourishes nearby because horse meat is considered a gourmet delicacy in Japan. Ironically, however, thanks to the nuclear disaster, these horses will be allowed to live out the full span of their lives, without any likelihood of being slaughtered for food as they grow older.

Among the many Fukushima films emerging from the disaster, this project alone does not "explain." The horses cannot speak, and the filmmaker does not anthropomorphise them. The audience is gradually drawn into their world of discovering how simple and beautiful it is to eat, to run, to live. The name of the horse festival, Soma Nomaoi, literally means "chasing wild horses." Chasing and harnessing the wild – perhaps that is what humans have done throughout the history of civilization.

This is Matsubayashi's second film about Fukushima, following FUKUSHIMA: MEMORIES OF THE LOST LANDSCAPE (also available from Ronin Films).

THE HORSES OF FUKUSHIMA screened at the 2014 Dubai International Film Festival where it won a major award. Film critic and Jury member Tony Rayns reported: "Juries have a tendency to judge documentaries on the 'worthiness' of their subjects, but I don't think we were guilty of any such failing when we gave our Best Film prize to The Horses of Fukushima (Matsuri no Umi) by Matsubayashi Yoju. Scouting inside the "exclusion zone" around the crippled Daiichi Nuclear Plant in Fukushima, the director came across a stable of horses wounded in the tsunami ... The film is a paean to resilience and strength -- not only of the horses, but also of the men who look after them. It's also by some way the most original and moving of the many documentaries made in the aftermath of Japan's worst peacetime nuclear disaster".