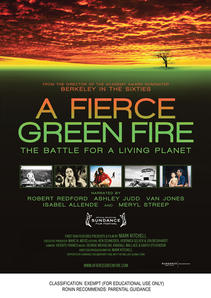 Directed and written by Mark Kitchell, Academy Award-nominated director of BERKELEY IN THE SIXTIES (also available from Ronin), and narrated by Robert Redford, Ashley Judd, Van Jones, Isabel Allende and Meryl Streep, the film premiered at Sundance Film Festival 2012, and has won acclaim at festivals around the world.

Inspired by the book of the same name by Philip Shabecoff and informed by advisors like Edward O. Wilson, A FIERCE GREEN FIRE chronicles the largest movement of the 20th century and one of the keys to the 21st.

The film unfolds in five acts, each with a central story and character:

1 Conservation: the battle in the 1960s to halt the building of dams in the Grand Canyon

2 Pollution: the fight in the 1970s against the dumping of toxic chemicals in the neighbourhood of Love Canal, Niagara Falls, New York

3 Ecology: perhaps the wildest ride of all environmental campaigns, as Greenpeace and "Sea Shepherd" take on the whalers

4 Sustainability: the struggle in the 1980s by Chico Mendes and Brazilian rubber tappers to save the Amazon rainforest

5 Climate Change: the long-term effort to address climate change, from its scientific origins to the growing pressure of international campaigns

Surrounding these main stories are seams of rich story-telling about environmental justice, the movement back to the land, and other struggles such as Chipko in India and Wangari Maathai in Kenya. Vivid archival film is matched with insightful interviews, offering a deeper global view of environmentalism as civilizational change, bringing our industrial society into sustainable balance with nature.

"The material is vast and it's an incredibly dynamic film. It's shaping up to be the documentary of record on the environmental movement." - Cara Mertes, Director, Sundance Institute Documentary Film Program

"Ardently passionate and naturally provocative, the eco-chronicle
A Fierce Green Fire has a genuine sense of history." - Paul Anderson, Variety