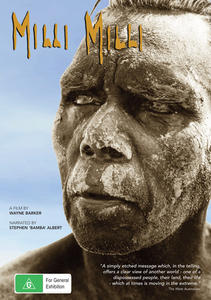 In MILLI MILLI Aboriginal director Wayne Barker takes the viewer on a cultural travelogue through the three regions of the Kimberleys: the coast, the rivers and tablelands, and the desert. Storytellers talk of past and present events and offer different visions of an Aboriginal future. The film celebrates the diversity of their historical and cultural experiences as well as a commonality of views and interests which emerges from their stories.

In the river and tablelands region against a majestic rock gallery of Wandjina images, David Mowaljarlai tells the Dreaming story of the death of one Wandjina ancestor. Mowaljarlai's passion about maintaining the Law and his commitment to today's youth are powerfully depicted through the mix of dramatic images with his story and song.

Mackie Williams relates a coastal story about her grandfather who, beaten to death for refusing to collect white mans' treasured pearl shell, was reborn - a story of spiritual triumph over the materialism of European invaders.

Ivy Napangardi and Jemma Napanangka, desert women from Balgo, tell stories of first contact with explorers and pastoralists. Magnificent images of contemporary paintings from the western desert illustrate a story of spiritual revival inspired by these powerfully motivated women.

MILLI MILLI is a message of history, identity and spirituality. It offers an opportunity for a wider audience to appreciate the mythology, spirituality, dynamics, fortitude and sincerity of Aboriginal people and provides an intimate introduction to people from different parts of the Kimberleys and to different levels of Aboriginality.

"A simply etched message which, in the telling, offers a clear view of another world - one of a dispossessed people, their land, their life - which at times is moving in the extreme." - The West Australian.