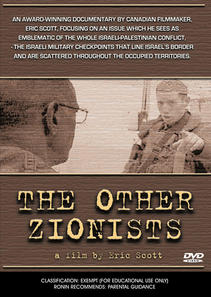 Israeli checkpoints line the border between Israel and the Occupied Territories; many are also set up deep in the heart of the West Bank, dividing villages in half and separating major population centres like Nablus, Hebron and Ramallah from their surrounding hinterland. These checkpoints are a serious point of contention between Israelis and Palestinians. The Israeli government argues that the checkpoints are needed in order to stop suicide bombers. Palestinians argue that the checkpoints are demeaning and add insult to injury, keeping innocent Palestinians away from desperately needed jobs and sharply limiting their access to schools and hospitals, even in dire emergencies. The checkpoints have become the target for charges of basic civil rights abuses, and widespread criticism of the Israeli police and military officers in control.

The main character in his story is Ronnee Jaeger, a Jewish-Canadian woman who divides her time between Toronto and Jerusalem. She and other Israeli women have founded Machsom Watch, or Checkpoint Watch, an association of women who monitor the checkpoints for human rights abuses. If need be, they confront Israeli soldiers on behalf of Palestinians, and they use mobile phones to make calls to higher authorities when needed. But most of the time they watch and take notes. Machsom Watch has proven to be a potent form of intervention which has achieved a decline in complaints about checkpoint practices.

Jaeger and her colleagues rely on the fact that they are often older Jewish women with white hair, finding that soldiers often defer to them in their monitoring role. 'I think they try not to do what they wouldn't want their aunt or grandmother to see'. Her concern, and that of her hundreds of female colleagues in Machsom Watch, is that the checkpoints are actually pushing Palestinians into ever-increasing hostility and radical positions, and are damaging Israeli souls as well. It's a controversial position that has led the women into conflict with many critics of their actions.

Scott's film is powerful and beautifully executed. The women at the heart of the film are committed and passionate. Together they have made a film that speaks eloquently about the nature of the conflict and the psychological effects of Israel's Occupation, both for Israeli's and for Palestinians.