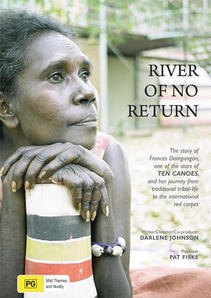 From early childhood Frances Daingangan, a 45-year-old Yolngu woman, dreamed of being a movie star - a dream that came true when Rolf de Heer cast her in the film TEN CANOES. RIVER OF NO RETURN documents her extraordinary story.

Frances is a Yolngu woman from the Gupapuyngu tribe in North East Arnhemland, Australia. As a young girl, she loved to emulate Marilyn Monroe – dancing, singing and dressing like her idol. But Frances was always told that her movie star aspirations were ridiculous and impossible for a Yolngu bush girl.

At the age of eight, Frances was 'promised' to a Yolngu man called Djigirr. But several years later, she was abducted by a man from another tribe. Now forty-five, with three daughters and six grandchildren, Frances has returned to live on her mother's tribal land and burial place, a sacred area called Nangalala.

Frances' life is one of daily struggle, often hunting and digging for food or borrowing money to survive.

The subsequent huge success of TEN CANOES enhanced Frances' confidence immensely. Seeing herself on the big screen, knowing she was being seen world-wide fulfilling her dream, brought Frances a new sense of self-worth and with it a world full of possibilities.

This new-found strength and courage enabled Frances to leave an abusive relationship and become the first of many abused women in her community to take out a restraining order against a violent partner. Frances discovered that following her chosen path involved challenging some of the traditional cultural and familial values of Yolngu way of life.

"We city dwellers do not have any idea of the real issues facing Aboriginal people in remote Australia. Jenny Macklin (Federal Minister for Aboriginal Affairs) should see this film ten times!" - Academic and author, Eva Cox.

"A film that makes us weep with frustration at the obstacles Frances faces, and laugh with glee at her sense of humour and tenacity." - Irina Dunn, City News July 2008.

"This remarkable documentary captures the incredible cultural gap that exists between the western industrialised world and remote Indigenous communities, and the spirit and determination of one woman going up against insurmountable odds in order to follow her dreams." - ImagineNative 2008 Film Festival Program, Toronto, Canada where River of No Return screened on Opening Night.

"This documentary was perfect for a New York audience – most of us are still immigrants in pursuit of the American dream. We could identify with Frances's refusal to be burdened by prejudice .... Inspirational!" - Audience member, Margaret Mead Film Festival, New York, November 2008.