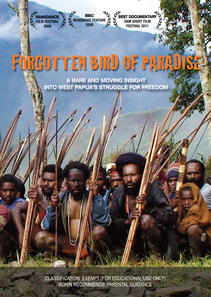 Filmed clandestinely in West Papua by British filmmaker, Dominic Brown, FORGOTTEN BIRD OF PARADISE provides a rare and moving insight into the struggle for independence that has gripped West Papua for over 45 years. It includes never before seen footage of OPM rebel fighters at a stronghold deep in the Papuan jungle, as well as interviews with human rights victims of the Indonesian regime.

Frequently breathtaking and thought-provoking, FORGOTTEN BIRD OF PARADISE provides a remarkable insight into a world where ancient traditions and cultures live on into the modern age. Above all it shows the inspiring resilience of a people who have suffered so much under Indonesian occupation, but whose determination for freedom burns stronger now than at any time in history. Finally their cries are starting to be heard.