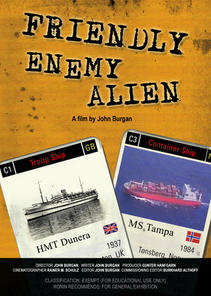 June 1940: the HMT Dunera leaves Liverpool docks crammed with over 2,500 German, Austrian and Italian internees, supposedly heading for Canada. Eight weeks later the steamship sails under Sydney Harbour Bridge. The official files about the voyage are sealed till 2040. Now, over sixty years later, the last survivors of the "Dunera Scandal" tell their story.

August 2001: Australian Special Forces board a Norwegian freighter to prevent it from landing on an island some 2000 kilometres north-west of Perth. The 438 mostly Afghan men, women and children rescued from a sinking ferry huddle on the deck of the MV Tampa and wait as the governments of Norway, Indonesia, Australia and the UN argue about who is to take them. Two weeks later the asylum-seekers are deposited on the even more remote island state of Nauru. It's the start of Prime Minister John Howard's so-called "Pacific solution".

Friends, enemies, aliens - is it possible to be all three at once? Jewish refugees flee Hitler at the outbreak of the war and are given asylum in England, to be interned as suspected fifth columnists, shipped off to Australia to endure months behind barbed wire deep in the outback. To suffer the slings and arrows of outrageous fortune, as Hamlet said. The genre here is tragicomedy: our protagonists endure a series of cruel injustices but survive the humiliations and absurd mishaps to experience a kind of Happy End.

A strange quirk of history, a one-off? Maybe. The differences between a group of mostly well-educated Middle Europeans and a persecuted ethnic minority from Afghanistan are only too apparent; the Dunera story came to its conclusion long ago, whereas the Hazaras' status is still in question. There are villains and good guys in Friendly Enemy Alien, but as the title suggests, it's really a tale of shifting identities. The "fifth columnist" or the suspected terrorist: such labels have particular resonance in times of insecurity. The refugee, the unwanted outsider, presents a useful screen upon which to project all sorts of fears, some justified, others not. Anyone could have pretended to be a refugee in order to gain entry to Britain or Australia.

In "L'Empire des Lumières" Magritte imagined the simultaneous coexistence of day and night. Sadness and happiness co-exist in Friendly Enemy Alien, where the twin voyages are not only journeys through space, but travel through time, that is to say: in memory.