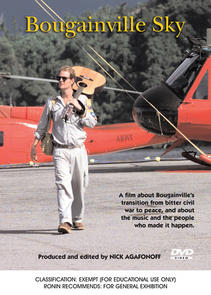 On war-torn Bougainville Island, a young Australian songwriter found himself working for the world's first ever unarmed international peace keeping operation. This film tells the story of how he worked with music and humour to help the people of Bougainville find the courage to untangle themselves from the web of a bitter civil war.

When war on the remote Papua New Guinea Island of Bougainville ended, the combatants invited the international community to send in a peace-keeping force on one condition: they come unarmed. The invitation was reluctantly accepted, and a young Australian songwriter Iain 'Fred' Smith found himself amongst those working for the world's first ever unarmed international peace-keeping operation.

With no coercive powers at their disposal to enforce the peace, innovation and communication were the only option. Bougainville Sky tells the story of how Smith worked with music and humour to help the people of Bougainville overcome years of fear and distrust to restore peace.

This beautifully shot film allows the Bougainvilleans to tell their own story and captures the struggles, the strength and the humour of a people who brought themselves back from the chaos of war.