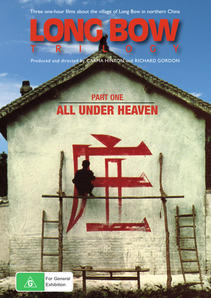 Ancient traditions persist: we see an elaborate funeral, a country fair, a local animal market, an open air opera. But changes have come to Long Bow, with the shift from collective to individual farming. A sense of dramatic change accompanies the simple rhythms of rural life.

ALL UNDER HEAVEN is the first part of a three part series [Part 2: SMALL HAPPINESS; Part 3: TO TASTE 100 HERBS]. The three films are extraordinary portraits of contemporary Chinese life. Carma Hinton is uniquely qualified as an observer of China. She is the daughter of William Hinton, whose detailed first-hand descriptions of Long Bow Village's experiences of revolution since 1947 in the books FANSHEN [1966] and SHENFAN [1983] are well-known. Carma Hinton was born in Peking in 1949 and spent the first 21 years of her life in China. As a young student during the Cultural Revolution, she travelled the countryside and worked in villages like so many young Chinese of her generation. She had visited Long Bow many times before the six months of filming in 1983 that went into the making of the LONG BOW TRILOGY.