SHIFT IN PERCEPTION, A 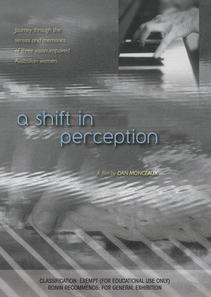 A SHIFT IN PERCEPTION is a poetic exploration of living with blindness. Taking a freely experimental approach, conversations with three blind South Australian women are presented using a broad range of camera techniques on Super8 film (shot predominantly in black and white).

"The filmmakers use stop-motion animation, time lapse and many other methods of abstraction to invite the viewer to celebrate the beauty of the women's unique perspectives. With voices set in the midst of an experimental score by composer Alex Carpenter, the film washes over its audience like a dream; a heightened sensory experience." - documentaryfilms.net

"A visual treat ... the women's insights and the filmmakers' artistic approach are memorable, evocative and poignant." - Sasha Grbich, Realtime OnScreen

"Oozing with visual poetry sparking off an air of true feel-good nostalgia. ... Through the words of three visually impaired women from South Australia, the film leads us into a rich illustration of their lives, dreams, fears and day to day observations. A SHIFT IN PERCEPTION is beautifully poetic whilst treating its subjects with due respect and grace through the careful choice and fine crafting of the associated imagery, music and soundscape. Predominantly shot on black and white, the film employs a broad range of camera techniques to engage the imagination and cleverly illustrates the unique and rarely heard perspectives of its three, remarkable protagonists." - Giles Perkins, onsuper8 website