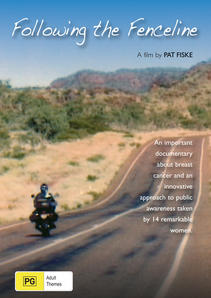 In mid-1996 a group of 14 women rode motorbikes around Australia to promote breast cancer awareness. Mainly middle aged women, their arrival in towns on motorbikes made quite a sight. Many riders from a number of motorcycle clubs raised money, had barbecues, rode legs of the journey or escorted the 'fenceliners' in and out of towns and cities. This made the ride look even more extraordinary. Cancer councils and other groups in all states organised morning and afternoon teas, luncheons and sometimes dinners to welcome these intrepid riders so they could tell and exchange stories with local women. The ride was hectic but successful. It made many people more aware of health risks and that there can be life after breast cancer.

This film tells the story of the ride - about the women who rode, the people they met, the fun, exhaustion, trials and tribulations, the talkfests, mastectomies, lumpectomies and reconstructions and shows the spectacular Australian landscape they rode through.

The film is an exciting record of the ride, informative about breast cancer and about so much more. It is an inspiring 'road movie with a difference'!