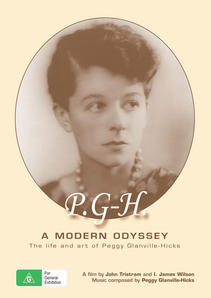 P.G-H arrived on the scene in New York in the 1940s, having studied with Vaughan Williams, Nadia Boulanger and other composers in England and Europe. Between composing, she became an outspoken and influential critic for the New York Herald Tribune where she championed the work of young American composers. A keen entrepreneur, she presented concerts and fought to establish new music alongside the traditional classical repertoire.

Her large body of composition includes concertos, sonatas, four operas and five ballets. Her grand operas, Nausicaa, in 3 acts with a libretto by Robert Graves, and Sappho, with a libretto by Lawrence Durrell, became her greatest triumphs.

At the height of her career, P.G-H. was struck down with a life-threatening brain tumour. She recovered from surgery and, although no longer composing, continued to be a passionate advocate of modern music until her death in Sydney in June 1990.

P.G-H. was interviewed extensively for this film, and in her characteristic witty and acid-tongued style, talks of her life's work, her loves, and beliefs.

The film also includes interviews with some her closest friends and collaborators, including the writer and composer, Paul Bowles, along with John Cage, Yehudi Menuhin, and Peter Sculthorpe.