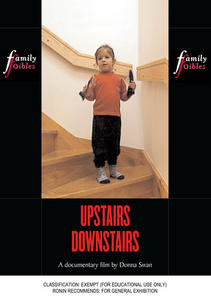 Harald and Louise are doing things differently. After their 14-year relationship broke up during the first 18 months of their daughter Sophia's life, they decided that to stay together 'for the sake of the kids' was wrong.

Determined not to break up the family home, they have converted their house into two self-contained living areas and 3-year old Sophia moves between them. This is no ad hoc arrangement but one carefully controlled by a 50:50 roster of single-but-equal parenting.

However, their friends don't seem to believe they've broken up! While Louise and Harald are optimistic about their experiment, they don't underestimate the challenges to making it work.

The other 4 episodes in the FAMILY FOIBLES series are: KIM & HARLEY & THE KIDS, MICK'S GIFT, MY MOTHER NANCY and THE WOODCUTTER'S SON.