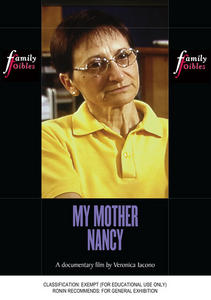 Nancy is fifty and has finally decided she needs a life of her own.

Having had a traditional Italian, Catholic immigrant upbringing in Sydney, marrying when her parents wanted her to and raising a family of three (including her daughter, Veronica, the director of this documentary), Nancy has challenged the cultural norms and opened a cafe without her husband's approval. He refuses to set foot inside the cafe and now there's talk of a family breakdown.

Meanwhile, Nancy's sisters criticise her bid for independence and, of course, her kids think they know what's best for her.

The other 4 episodes in the FAMILY FOIBLES series are: KIM & HARLEY & THE KIDS, MICK'S GIFT, THE WOODCUTTER'S SON and UPSTAIRS DOWNSTAIRS.