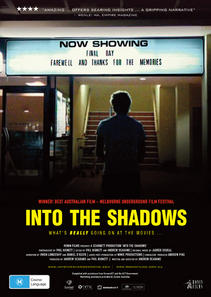 Into the Shadows journeys beyond the big screen to meet the filmmakers, distributors and exhibitors who bring Australian films to us, the audience. Away from the bright lights, the red carpets and paparazzi, an awful truth is discovered. The cinema was once a place where Australian culture thrived: audiences were educated, entertained and inspired by Australian stories, characters and landscapes. By 2009 when this film was released, alarmingly, out of the $895.5 million spent at the Australian box-office in 2008, only $36.6 million (3.8%) was spent on Australian films. Australian films are clearly not connecting with the cinema-going audience. Why?

Into the Shadows begins by tracing the history of Australian cinema, from the initial production boom in 1910-12, declining steadily to the barren years after World War Two. The film investigates the regeneration of the domestic production industry, championed by a dedicated few, in the late 1960s. Bruce Beresford, Anthony Buckley, Phillip Adams and Alan Finney recount what the atmosphere was like in the 1960s and 1970s while distributors and exhibitors, Andrew Pike (Electric Shadows), Chris Kiely (Valhalla), Natalie Miller (the Longford) and Antonio Zeccola (Palace) reveal how important the independent art-house cinemas were in contributing to the re-birth of the Australian film industry.

The closure of many of these independent art-house cinemas in recent years, typified by the demise of Electric Shadows in Canberra in 2006, exacerbates the difficulties that producers have in reaching cinema screens on a fair and equitable basis. Many exhibitors, past and surviving, question the efficacy of the industry's Code of Conduct, and talk frankly about unfair trade practices. These difficulties parallel the growing number of Australian films remaining unreleased.

But all is not lost. A new generation of Australian filmmakers have emerged and continue to push at the boundaries of the cinema trade, exploring new ways of connecting to the ever elusive but very important audience.

"Protecting their turf or organised crime? John L. Simpson articulates the stumbling blocks within the terms of trade that rule much of cinema distribution and exhibition in this most graphic examination of getting Australian films into cinemas. Anthony Buckley calls it the distributor/exhibitor cartel, which excludes producers. Robert Connolly calls the construct of film distribution a sausage factory ....and US indie champion Peter Broderick wonders why there is such a woeful lack of imagination in cinema exhibition and distribution that it's stuck in an out of date rut, instead of the industry creating commercially smart customised strategies.

Simpson, who took on the distribution of The Jammed (2007) at his own financial risk when no-one else wanted it, goes on to condemn the corporate gatekeepers of the business, citing how they failed to recognise a film that went on to universal critical acclaim, a warm public box office embrace and the accolade of Best Film at the publicly voted IF Awards (as well as 7 nominations in the AFI Awards including Best Film). While Shane Abbess, maker of Gabriel, was told he was too commercial for Australia.

And it is not just Ken G. Hall in 1966, but contemporary film executives such as veteran filmmaker and now distribution boss (at Walt Disney Australia) Alan Finney and Melbourne's Natalie Miller, and cinema operators like Paul Dravet of Sydney's Orpheum, who advocate showmanship as a key element of film exhibition.

Andrew Scarano's hard hitting and eloquent documentary not only refocuses the discussion about Australian cinema in its broadest sense onto the key weaknesses – both historically and currently – but picks out the crucial threads of the debate about the absence of suitable mechanisms for the films – after a challenging process of getting financed and made - to be shown to audiences. Never mind the tough job of making a film, filmmakers have invented ways around much of that, although traditional funding mechanisms are not as encouraging of edgy, innovative work. It's the stagnant pond of distribution that comes under sharpest attack.

It may not be comfortable viewing for many in the film industry, but it's a well structured work – adroitly edited - that deserves to be taken seriously. And guess what? It is being distributed by Ronin Films, whose Andrew Pike has always been the exception to the rule, offering Australian films a showcase when others wouldn't. Needless to say, he's one of the many interview subjects worth listening to in this film." - Andrew L. Urban, Urban Cinefile

"It might have been 43 years since producer, director Ken G. Hall said "No industry can be founded on masterpieces that don't get people to go and see them," but the rule of thumb still applies. This riveting documentary that traces the Australian film industry in an ever-changing world, takes a close look at how the industry clock ticks and why it's so tough. Tough to make films, tough to get them into cinemas and tough to entice audiences to see them. How important is it to have our own cultural identity? What is the value of a cinematic experience? What is the relevance of showmanship in film production? Director Andrew Scarano not only documents historic facts about the origins of how our local industry began, but looks at the direction it has taken and where we are today.

I hope I haven't made it sound dry and boring, because this film certainly isn't. It makes for lively and fascinating viewing, tracing the initial production boom in the early 1900s through the resurgence after the dead patch post-war, when filmmakers were instrumental in kick-starting the industry in the 60s and 70s. In the words of former exhibitor, highly respected historian and filmmaker Andrew Pike, 'there are young people growing up today who have no idea that the cinema experience is something other than the multiplex experience, or the DVD experience, or the internet experience, or heaven forbid, the mobile phone experience.' Before Pike's independent Canberra cinema Electric Shadows closed in 2006, it, like other similar independent cinemas such as Melbourne's Longford, the Lumiere and Sydney's Valhalla were the heart-beat of those cities in film-terms. Their closure is the result of the advent of the multiplex, which champions mostly the Hollywood film product.

The inscription on the simple black torch that Pike symbolically handed to Dendy Cinema chain when the cinema closed ('Out of the shadows and into the future') is more optimistic than the message Scarano's film delivers; although, it is exciting to hear about the new directions in which the industry is heading. Filmmaker Andrew Denton reminds us that as the industry navigates into new digital territory, 'Like all change; change is painful.' We are reminded of the importance of government funding, the incomprehensible 'gatekeeper' system when it comes to distribution and exhibition, the struggle to keep our identity and find the right direction as we reach that fork in the road for our industry, as filmmaker Robert Connolly points out. Many intelligent and knowledgeable people including producer Philip Adams, director Bruce Beresford, producer and distributor Alan Finney, director Clayton Jacobson and producer Anthony Buckley contribute by raising valid and potent truths. If you enjoy watching movies and are at all curious about this unique art form that so powerfully defines who we are, this is a film to seek out." - Louise Keller, Urban Cinefile

Follow this link to read The Age review:
www.theage.com.au/news/entertainment/film/family-doco-became-australian-cinema-shootemup/2009/10/26/1256405348336.html