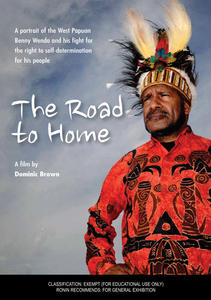 This powerful film is a portrait of the West Papuan Benny Wenda, now in exile in England, and his on-going fight for the right to self-determination for his people.

The film complements FORGOTTEN BIRD OF PARADISE (2009), another film by British filmmaker, Dominic Brown. For this new film on West Papua, Brown filmed Wenda over a two year period as he campaigned for his country's independence.

In 2002, Benny Wenda was arrested in his homeland of West Papua and placed on trial for allegedly inciting violence and arson, with the likelihood of a 25-year prison sentence. Risking his life, he escaped from prison during the trial, trekked alone for three weeks through the jungle to neighbouring Papua New Guinea, and was later granted political asylum in the UK.

From his base in exile, Wenda has continued his fight, presenting his people's case to political leaders, diplomats and human rights campaigners throughout Europe and North America, Papua New Guinea, New Zealand and Australia. His style of campaigning, with feathered headdress and ukulele, balancing good humour with philosophical reflection, is distinctive, and his message is impassioned and persistent. He has been nominated for a Nobel Peace Prize.