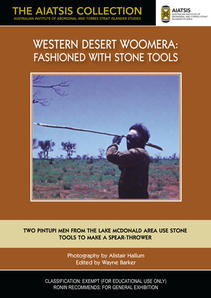 This remarkable film documents the making of a spear-thrower or woomera by two Pintupi men from the Western Desert cultural group who live in the Lake McDonald area in the central west of the Northern Territory.

The two men use stone tools, demonstrating techniques which are becoming rare in this modern day. Once a suitable mulga tree has been selected, sharp stones are used to cut an appropriate long sliver from a trunk and to shape it. An adze for further shaping is made with resin from spinifex grass to fasten a sharp stone to a wooden handle. Oil or grease is used to preserve the wood and to prevent splitting. The whole process of making the woomera takes around 12 hours.

The film also underlines the importance to the Puntupi of the spear-thrower and its many uses, including its practical value in hunting fast-moving game.

Alistair Hallum shot the film in 1970 when he was engaged by the Institute of Aboriginal Studies to record traditional crafts and rituals while the Institute's primary filmmaker, Roger Sandall, was pre-occupied with completing other work.

Hallum's expert cinematography was edited a decade later by Indigenous filmmaker, Wayne Barker, while he was working as a trainee at the Institute's Film Unit, then managed by David and Judith MacDougall and Kim McKenzie.