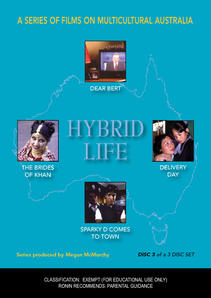 THE BRIDES OF KHAN

Alan Khan migrated to Australia from Bangladesh in the seventies. He came to get a pilot's license and stayed to become the king of Sydney's wedding photographers. "In Alan's waiting rooms, I met many young couples planning their weddings - Macedonian, Italian, Greek, Lebanese, Croatian, Chinese, Sri Lankan and Indian. Some were marrying people outside their cultural milieus and some were marrying within traditional boundaries. But all of them had a vision for the place of their culture in their wedding." - Safina Uberoi.

DEAR BERT is a tale of two worlds colliding -
Greek collides with Aussie, television collides with reality. Christina questions her identity through a medium where she feels inaccurately represented. There was never anybody Greek on television when she was growing up. "I grew up Greek in Australia. My understanding of Australian culture and language was through television. My mother taught me how to read and write Greek and my father taught me about Greek religious icons. Television, in particular Bert Newton, taught me how to be an Aussie. " - Christina Heristanidis.

Written by Khoa Do.
Directed by Jane Manning.
Produced by Liz Watts.

For 11-year-old Trang, it's going to be one of those days - she has to get her Vietnamese mother to attend her school's parent-teacher interview but it also happens to be delivery day for the garments in her mother's sweatshop and her mum is way too busy. DELIVERY DAY is an insight into the world of duck eggs, Toyota Celicas and outworkers, which explores both generations of the Vietnamese migrant experience through the eyes of a young girl. It is one of the few Australian dramas to depict Vietnamese Australians.

A story about a young Australian raver who happens to be of Croatian background: DJ Sparky D is in town for one night only and Stretch is planning a wild night of dancing and drug-crazed debauchery. But when Stretch's dad pushes him into picking up a family friend from the airport, things start going very wrong. Stretch is late for the gig, with no drugs, an angry girlfriend and a Croatian salami smuggler in the passenger seat.