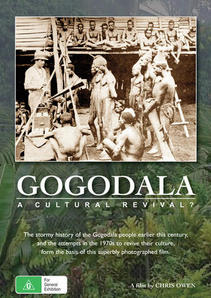 The Gogodala, like other people of the swampy lowlands of western Papua New Guinea, traditionally produced magnificent carvings for use in ceremonies. In the early decades of this century, European missionaries and their Papuan evangelists siezed upon such objects as symbols of the 'heathen darkness' from which the Gogodala were to be rescued. By the 1930s, the work of the missionaries had resulted in mass burnings of ritual carvings and the suppression of traditional ceremonies.

In the early 1970s, anthropologist Tony Crawford visited the Gogodala area of Papua New Guinea. He found virtually no traditional artwork left, and the people in 'a state of cultural stagnation'. Moved by the desolate situation and stimulated by discussions with the older men in the area, Crawford submitted a detailed plan to the newly formed National Cultural Council of PNG to construct a traditional long-house, in an attempt to revive the carving traditions of the past. A grant was awarded and, despite opposition from local Gogodala Christians, the long-house was completed and officially opened as the Gogodala Cultural Centre in 1974.