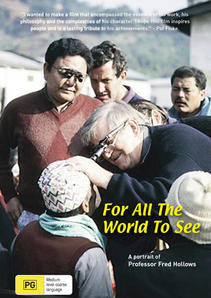 Professor Fred Hollows was a controversial, larger-than-life character - abrasive, determined, flamboyant and full of contradictions. Some loved him, some hated him.

He lived by the creed that you can "really only accomplish yourself when you get involved with others' welfare." Such involvement is the story of his life and this story is superbly told in FOR ALL THE WORLD TO SEE. The style of this film, like the man, is direct, forthright, warts and all.

While displaying missionary zeal for his work, Hollows definitely wasn't a missionary. Rather than conquer and convert, his philosophy was to train Indigenous people to help themselves.

The film includes footage shot during expeditions to Eritrea, Nepal and Bourke, archival material and interviews. Glimpses of him at home and on the road, with friends and family, complete the portrait of this dynamic man.

The Hollows' team arrived in Eritrea just after the country had won a victory in a 30-year war of independence. With a single-minded passion he worked with his team to train eye surgeons and establish a factory to manufacture intra-ocular lenses.

In Nepal, plunging valleys and rugged mountain ranges created a dramatic backdrop to his work in Australian-funded eye camps.

Alongside his friend and protege, Dr Sanduk Ruit, we see Hollows helping to take surgery to remote villages so that cataract-blinded people can receive treatment as good as that available in the West.

The film chronicles Hollows' work, from the early 1970s, to improve the health of Aborigines. He was a founder of the Aboriginal Medical Service and the Trachoma Programme.

Hollows was often unconventional in his approach to things with little tolerance for humbug. His outspoken views on the poor health of Aborigines, policy on AIDS and other issues gained him both friends and critics.

He is variously described as snarly, insensitive and charming. But whatever you think of him, Fred Hollow's life is without doubt an inspiration and you cannot remain untouched by his example.

"I wanted to make a film that encompassed the essence of his work, his philosophy and the complexities of his character. I hope this film inspires people and is a lasting tribute to his achievements." - Pat Fiske.