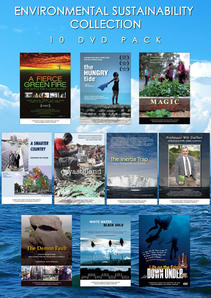 THE HUNGRY TIDE (53 & 90 min versions on DVD, Rated PG) A film about the central Pacific nation of Kiribati, one of the countries in the world most vulnerable to climate change.

A SMARTER COUNTRY (55 mins, Rated G) As Australia struggles with the harsh effects of climate change, green pioneers and visionaries are working towards an ecologically sustainable future in agriculture, architecture, renewable energy, and how we live on our planet - both here and in America, China and in developing countries.

MAGIC HARVEST (55 mins, Rated G) Feeding the world's ever-expanding population is a growing global concern. Where is the land that once grew food? It's at your own back door! This documentary tells the story of a backyard revolution - new food-growing gardens, one square metre at a time.

E-WASTELAND (20 mins, Rated G) Without dialogue or narration, this film presents a visual portrait of unregulated e-waste recycling in Ghana, West Africa, where electronics are not seen for what they once were, but rather for what they have become.

THE INERTIA TRAP (45 mins, Rated G) Packed with information, internationally renowned climate scientists give a clear and easy to understand explanation of the changes happening in the world's oceans.

PROFESSOR WILL STEFFAN (59 mins, Rated G) Climate change is real and presents grave dangers for societies globally. This presentation by Professor Will Steffen, Executive Director of the ANU Climate Change Institute, provides an easy to understand and comprehensive overview of the climate change issue.

WHITE WATER BLACK GOLD (57 & 83 min versions on DVD, Rated G) A sober look at the untold costs associated with the world's thirstiest oil industry: the Tar Sands in Canada. This documentary raises important questions about how much environmental damage we're willing to tolerate to feed our oil appetite.

THE DEMON FAULT (52 mins, Rated PG) Miners, environmentalists, police, landowners and Aboriginal people come head to head in a deadly serious yet crazy battle over a gold mine, located in a sacred and ecologically sensitive region of Australia's fast-disappearing wilderness.

VOICES OF TRANSITION (65 mins, Rated G) A highly acclaimed, award-winning film from German director, Nils Aguilar, powered by the conviction that crisis can be a major catalyst for change. The film present pathways towards a new model of human existence: one which is fair, environmentally sound and fulfilling, with soil and people supporting each other in a balanced and sustainable system.