BATTLE OF THE SITES 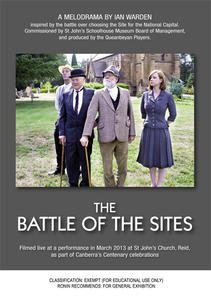 A melodrama by Ian Warden inspired by the battle over choosing the Site for the National Capital. Commissioned by St John's Schoolhouse Museum Board of Management, and produced by the Queanbeyan Players.

THE BATTLE OF THE SITES was an initiative of St John's Schoolhouse Museum in Canberra, as part of the city's Centenary celebrations in 2013. With meticulous in-depth research, it was written by one of Canberra's best-loved literary identities - the essayist and satirist, Ian Warden.

Using extracts from actual historic texts, the play explores the vehement disputes surrounding the choosing of the site for the National Capital, culminating in Lady Denman's triumphant declaration of the city's name on 12 March 1913.

This DVD is a record of the play (filmed with three cameras), as produced by the Queanbeyan Players, and performed live inside the historic St John's Church.

Canberra was far from the original choice as the national capital. Rivalry between Sydney and Melbourne meant that the capital needed to be somewhere in between, but there were many options – Dalgety and Wagga Wagga among them - all eagerly promoted by their supporters whilst denigrating rival bids.

Intricate political games played a major part in the decision to select the site of Canberra as the young nation's capital but so did the prevalent social philosophy that Ian Warden calls "environmental determinism": the belief that a cool, but "not Siberian", climate would enable men to think more clearly and would stimulate a healthy life-style for our nation's leaders.

With Georgia Pike as the narrator and as Lady Denman
and (each in several roles) Jim Bowring, John McGlynn, Phil Perlman and Dale Stam.