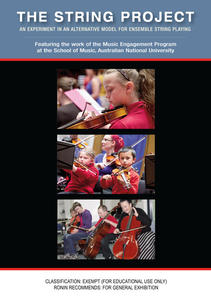 Late in 2013 the Music Engagement Program (MEP), of the School of Music at the Australian National University, initiated a practical instrumental project in music and skill-sharing called the MEP String Project. The project was made possible by a fellowship from the ANU, building on the regular funding from the ACT Government that supports the on-going activities of the MEP.

The String Project was designed to develop the MEP's already strong relationship with the new, innovative ACT Government Arts Policy, which has as its first principle, to 'Facilitate community participation in and access to the arts.' Excellence, in all its facets, emerges from this first principle.

At the same time, the project used the MEP's relationship to its home institution, the ANU, to include community-based research via an under-graduate course.

The project involved over 70 people, from the very young to senior citizens: it included accomplished musicians and beginners; it was developed in consultation with all its users; it involved multiple learning levels with multiple facilitators; and it resulted in a range of outcomes for future use and development, including flexible arrangements that offer inclusive music making opportunities in string playing.

The film features interviews with participants including adult beginners who expressed amazement that, with what they called "just seven minutes of lessons", they were empowered to play in an ensemble on stage at the ANU's Llewellyn Hall.

The String Project was led by Dr Lauren Davis from the Riverina Conservatorium of Music, Wagga Wagga, and Dr Susan West and Georgia Pike of the MEP team.

The DVD also includes short item from a related string workshop at the Mitchell Conservatorium of Music, Bathurst, involving a range of skill levels from absolute beginners to experienced professionals.­

The MEP String Project was funded through an ANU Fellowship awarded to Dr Susan West, with on-going support for the MEP from the ACT Government and artsACT.