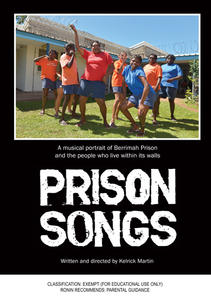 Aboriginal citizens make up 30% of the Northern Territory's population but in its largest prison, over 80% of the inmates are Indigenous.

The inmates of Darwin's Berrimah Prison are shown in a new light in Australia's first documentary musical. The inmates share their feelings, faults and experiences in the most extraordinary way – through song.

Berrimah Prison has been described as Dickensian with its dirt, rats, mosquitoes and unbearable heat. If nothing else, it is an old, overcrowded, tropical jail facing closure. When it first opened in 1979, it was designed to hold 115 prisoners. In 2014 it strains to hold more than 800.

The inmates are varied, both men and women, some from good homes, others from dysfunctional families. Many come from remote communities where English is the second or third language spoken and the traditional law of their society is in conflict with European laws. This documentary gives voice to these normally overlooked Australian citizens.

As distinct from a concert-based documentary, singing pervades PRISON SONGS with prisoners breaking into hip-hop, blues, country, reggae or gospel as they talk about the reasons for their imprisonment. The personal, intimate stories mesh together to create a portrait of life in a society with one of the highest incarceration rates in the world.

All the prisoners in Berrimah have their own story to tell. Life in a contemporary Australian gaol has never been filmed with such detail, emotional depth or with such seriousness and humour. It is a snapshot of Berrimah Prison, just prior to it being decommissioned as an adult prison in late 2014.