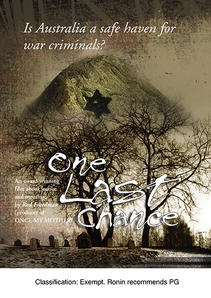 An important and provocative film suitable for Holocaust Studies, ONE LAST CHANCE was filmed in Lithuania, Israel and Australia. This documentary produced in 2000 explores the Australian governmentʼs handling of allegations that a South Australian resident, Antanas Gudelis, was a war criminal and Nazi supporter, wanted for trial in Lithuania for leading a "death squad" which executed some 7,000 Lithuanian Jews and Communists during World War Two.

The film uncovers new evidence which questions the role of the Australia government in failing to successfully prosecute or deport suspected war criminals like Gudelis. It also questions the ambiguous intentions of the Lithuanian government. Gudelis was never charged and died a few years after the film was made and shown on SBS Television. The film raises questions of politics and morality which we still need to be asking today in relation to other more recent wars.