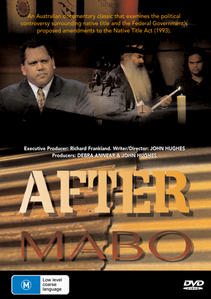 AFTER MABO was filmed during 1996 and 1997. It provides the most relevant 'snapshot' from that period of the land justice issue as it unravelled over an eighteen month period. AFTER MABO dispels many of the myths about native title and exposes the real political and economic agenda behind John Howard's 'Ten Point Plan'. AFTER MABO takes us behind the doors as Indigenous representatives attempt to fight the amendments in the media, in the bush and in the halls of Parliament House, Canberra.

AFTER MABO features a wide range of respected Indigenous figures including Noel Pearson, Peter Yu, Pat Dodson and filmmaker Richard Frankland, speaking first-hand about land justice and the threat that the proposed Howard Amendments had to their land and their rights.

'There are questions here at stake that are bigger than the small hearts that have concocted the 10 point scam ... as vigorously as the present government may insist on where the moral and legal pendulum should properly sit, just as vigorously, just as vehemently, just as desperately must we insist on the moral and fair compromise set out by the High Court and negotiated with the Federal Government in 1993.' - Noel Pearson, Chairman, Cape York Land Council.