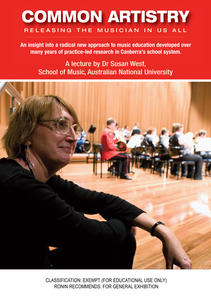 The notion of "Common Artistry" is one of the basic concepts behind the work of Dr Susan West at the ANU's School of Music in re-defining music education – both its practice and its underlying philosophy. The Music Engagement Program developed by Dr West focusses on long-term engagement in active music-making (most basically singing) as the primary desired outcome of music education. Traditionally, statistics indicate that music-making tends to end soon after formal music education classes end, for the vast majority of people. In other words, music education is not necessarily achieving the goal of promoting engagement in music-making.

In addressing this paradox, Dr West returns to the assumption that all humans are born inherently musical, and observes how this natural drive is progressively eroded by social forces to the point that most adults regard themselves as physically unable to sing or play an instrument. "Common Artistry" is a concept that foregrounds the belief that we are all innately artistic (and musical) and that the goal of music education needs to focus on active engagement in the arts, rather than on passive consumption.

In this context, Dr West argues that we don't need to teach children to participate in music making; we simply need to avoid sabotaging their natural inclination to make music. Further, the often expressed adult fear of singing (among other forms of artistic expression), and concerns about "quality", "talent" or skill are all socially constructed and can, therefore, be de-constructed.

Dr West performed extensively as a flautist and piccolo player with the WA Symphony Orchestra and with the Sydney Symphony Orchestra, as well as a number of woodwind and chamber music ensembles that toured nationally and internationally. She also studied for a year in Hungary in the Kodaly method before developing her own practice and philosophy in music education at the Australian National University. She is currently an Associate Professor at the ANU's School of Music. She lectures extensively around Australia and overseas, and is the author of many articles about her approach to music education, and her work has been the subject of four PhD theses.

Dr West's Lecture is introduced by Professor Adrian Walter, at the time Head of the ANU's School of Music. He is currently (2013) Director of the Hong Kong Academy of the Performing Arts.

Dr West's work is supported by the ACT Government through artsACT. Thanks to the Australian National University. Produced by Ronin Films.