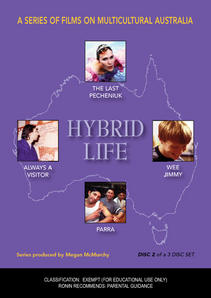 Nevin's father rejects Australian society but Nevin decides to focus his energy on helping Muslim teenagers work through the problems he experienced - growing up as a Muslim Turk in a predominantly Anglo environment. Dealing with everything from Christmas to kids blaming him for Gallipoli. As a teacher at an Islamic college he takes part in a project encouraging Muslim boys to reveal their emotions honestly to their fathers. At the same time, he confronts his difficult relationship with his own father.

Ness is a third-generation Russian. She has spent most of her life either denying her family's existence or running away from it. Several years ago she changed her name by deed-poll. She thought she had killed off the part of her that was different. A phone call from her Aunt Tash, who disappeared 22 years ago, changed all that. For years she felt an overwhelming connection to this woman, whose total rejection of her family and their cultural values mirrored the intensity of her own feelings. The call became the catalyst for Ness to contact her family and put some of her ghosts to rest.

Despite being born an Australian, Wee Jimmy has been brought up within the insular confines of an extended Scottish immigrant family. For Jimmy, who has never left Australia, Scotland is home. At school, Jimmy has seen himself as separate from the other kids. At a family gathering to watch the Edinburgh Tattoo, he finally discovers the shocking truth - that his own father was not a Scot. Jimmy is faced with the realisation that he is as excluded from his family's cultural world as his Hungarian stepfather.

Set in Parramatta, Western Sydney, this film illustrates the life of one of the largest shopping centres in the southern hemisphere. Operating more like a town square and old market place combined, the shopping centre in Parra is a microcosm of multicultural Australia. We are taken through the rituals of cruising the mall by Belinda, David, Jamie and Joe-Mark, all of whom know the scene, the crowd and the coolest shops.