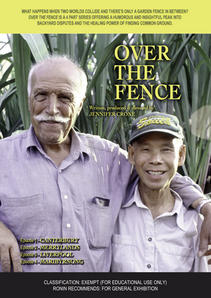 A tale of many cultures and two gardens. Sydney's Riverwood Public Housing Estate has 2000 apartments and more than one third of the residents come from non-English speaking backgrounds. It's had its fair share of social problems, but a shared love of flower and vegetable gardening on common land has been helping residents to get to know each other. It was working well until Mr Moon's thriving chilli patch went one step too far. To stop people from stealing his chillies, the elderly Korean constructed a fence of iron bedsteads and other recycled junk. With the battle of the chilli patch heating up, will everyone have to get out of the kitchen garden?

Rosa built a Catholic shrine to her son but the neighbours are not so sure about it.

Ten years ago Rosa and Joe Pedavoli's son Vince died suddenly of Legionaires disease. In his honour the Pedavolis began building a shrine in their front yard. This homemade concrete construction - filled with statues and neon lights - is now reputed to have healing powers and is a magnet for worshippers hoping for miracle cures. Shrine building seems to be catching on in Merrylands and other families are also erecting religious monuments in their front yards. Now Mayor Malcolm Tulloch is caught in between devotion and the law as the shrine builders are ignoring the council's development laws.

The saffron robes of buddhist monks are colourful in the bush but their neighbours don't want them to build a temple.

The saffron-robed Khmer Krom Monks are hoping to contribute to Liverpool's growth by building a large temple with gold and silver burial towers and meditation rooms that will attract worshippers and tourists. As a first step they install a giant gold buddha amongst the gum trees. It seems a brilliant plan but neighbours are finding their idyllic hideaway is beset by amplified chanting that is frightening their horses. To resore their peace and quiet, the neighbours complain to Liverpool City Council. The monks are ordered to stop holding ceremonies, sending them into financial crisis as donations dry up.

Lida wants a quiet retirement so she's not too happy about the Arabic boys playing soccer on her street.

Eighty-three year old widow Lida Roga has lived in the same house in Melbourne's Maribyrnong for almost forty years. An Italian immigrant, she's proud of her spotless house and garden in the tiny street which represents the material success she and her husband achieved after emigrating in the 1950s. But recently, new migrant families with up to eight children each have moved into small Department of Immigration flats across the street. Now the raucous sound of boys playing soccer across the street is disturbing Lida and her neighbours. She's tried asking the boys to be quiet but they only laugh at her. Her neighbours have dealt with the problem by building a brick wall across their front yard but a youth organisation is trying to teach the soccer boys the rules of behaviour in their new neighbourhood.