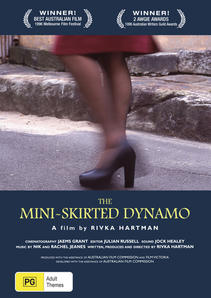 In this captivating, perplexing portrait of her mother, Dora Bialestock, filmmaker Rivka Hartman explores the wildly contradictory nature of this well-known Melbourne figure. Several inches less than five feet tall, she was a tiny dynamo, an awesome intellectual and an original thinker. A world renowned pathologist, she also campaigned tirelessly in the 1960s and early 70s for the Victorian Government to recognise the extent of child abuse in the community at a time when people refused to acknowledge that it even occurred. She also championed the development of good, freely available childcare.

Dora was a totally driven woman, and a compassionate mother to all, except her own daughter. Almost from childbirth, Dora's relationship with her daughter was stormy. "No matter what she was doing, she'd drop everything to get into an argument with me," Rivka recalls. Hartman has created an intensely personal work which has all the breathless energy characteristic of her mother. In the telling of Dora's story, Hartman reconciles a painful part of her past whilst illuminating for all of us a murky chapter of not so distant local history. It's compelling viewing.

"ONE OF THE BEST AUSTRALIAN DOCUMENTARIES IN YEARS ... BEAUTIFULLY CONSTRUCTED, LAUGH-OUT-LOUD FUNNY, HEART-WRENCHINGLY SAD, AND DELICATELY BALANCED BETWEEN ADORATION AND SEETHING RESENTMENT. DO NOT MISS IT!" - The Age.