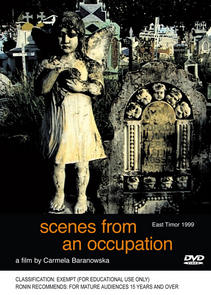 "They killed a child. The adults came out of their houses and said, 'kill us, not innocent children'. They came out, praying and shouting. That's when they machine gunned the adults."

"We may all die," says an East Timorese woman, "but if one is left, he will tell the story."

Carmela Baranowska is the only filmmaker to have documented this period. She first travelled to East Timor in March 1999, working as a one person crew and stayed on until the UN evacuated its compound in September 1999.

SCENES FROM AN OCCUPATION is filmed from the point of view of the East Timorese who were directly affected by the events unfolding rapidly around them. The footage includes eyewitness accounts of the role the Indonesian military played in a systematic campaign of destruction, murder and terror.

This film is a testament to the East Timorese people's courage, humour, strength and determination in struggling for their independence.